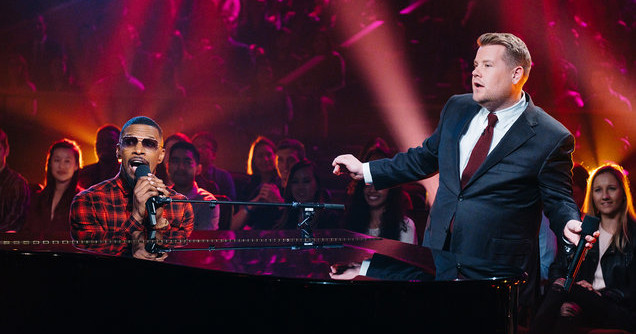 Jamie Foxx And James Corden do a sing along with free public domain songs as they have no budget. This is the sexiest version of Row, Row, Row your Boat you will ever hear!

Corden explained that while he loves singing medleys of songs with his friends – i.e. Carpool Karaoke – “paying for the rights to sing songs on television can be very, very expensive … And frankly, we blew our budget on catering.” With that, Corden brought out Foxx to spice up some unlicensed public domain songs like “She’ll Be Coming ‘Round the Mountain” and “Here We Go Round the Mulberry Bush,” with the actor/singer adding some sultriness to the nursery school jams.

At one point however, the mood inspired Foxx to transform a nursery rhyme into Coldplay’s “Yellow,” which resulted in an admonishment from Corden. “That is not a public domain song! That is incredibly expensive,” the host mock-shouted.

The 10-minute public domain performance ended with a disco rendition of “Twinkle Twinkle Little Star” that had the entire audience clapping while Foxx and Corden traded words that rhymed with “Wonder,” like Jane Fonda, Wanda (Sykes), “magic wanda” and Stevie Wonder.